about the
IMPERIAL IPA

Rapunzo - the Casanova
of the brewery

Rapunzo was famous throughout Fairyland as Casanova. Hardly any girl, maidservant, princess, mother-in-law or even queen could resist his charm. This often got him into tricky situations - but thanks to his impeccable talent for talking his way out of it he always managed to get off with a little slap on the wrist. 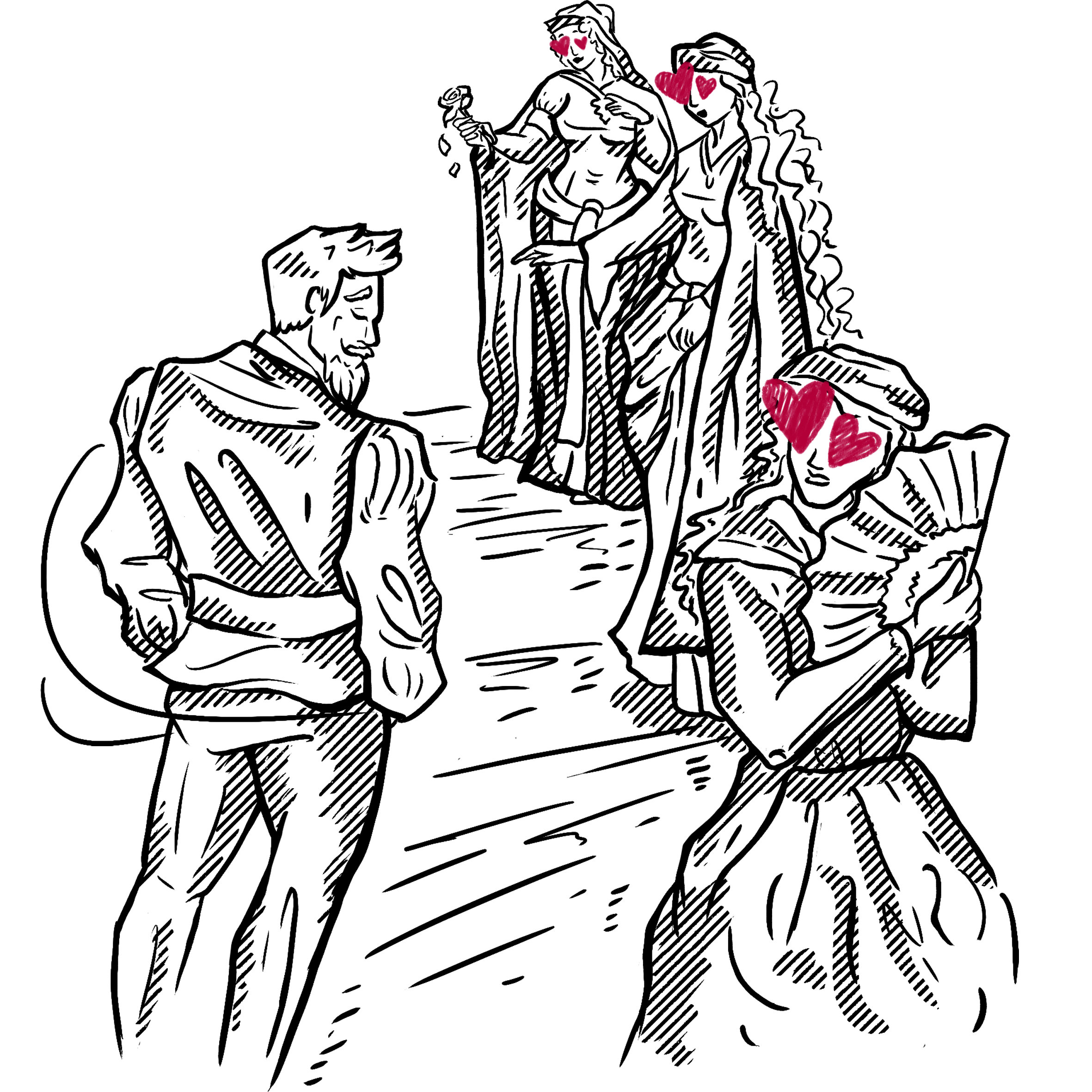 One day, Rapunzo met a very beautiful woman. The most beautiful woman he had ever seen. Her charisma was so strong it would make most men tremble. But Rapunzo wasn’t afraid and tried his luck with her. And, of course, he was successful. The pair spent a wonderful evening together drinking his home-brewed, fruity yet tangy barley juice and playing the lute together before disappearing into her chambers for a steamy night between the sheets. 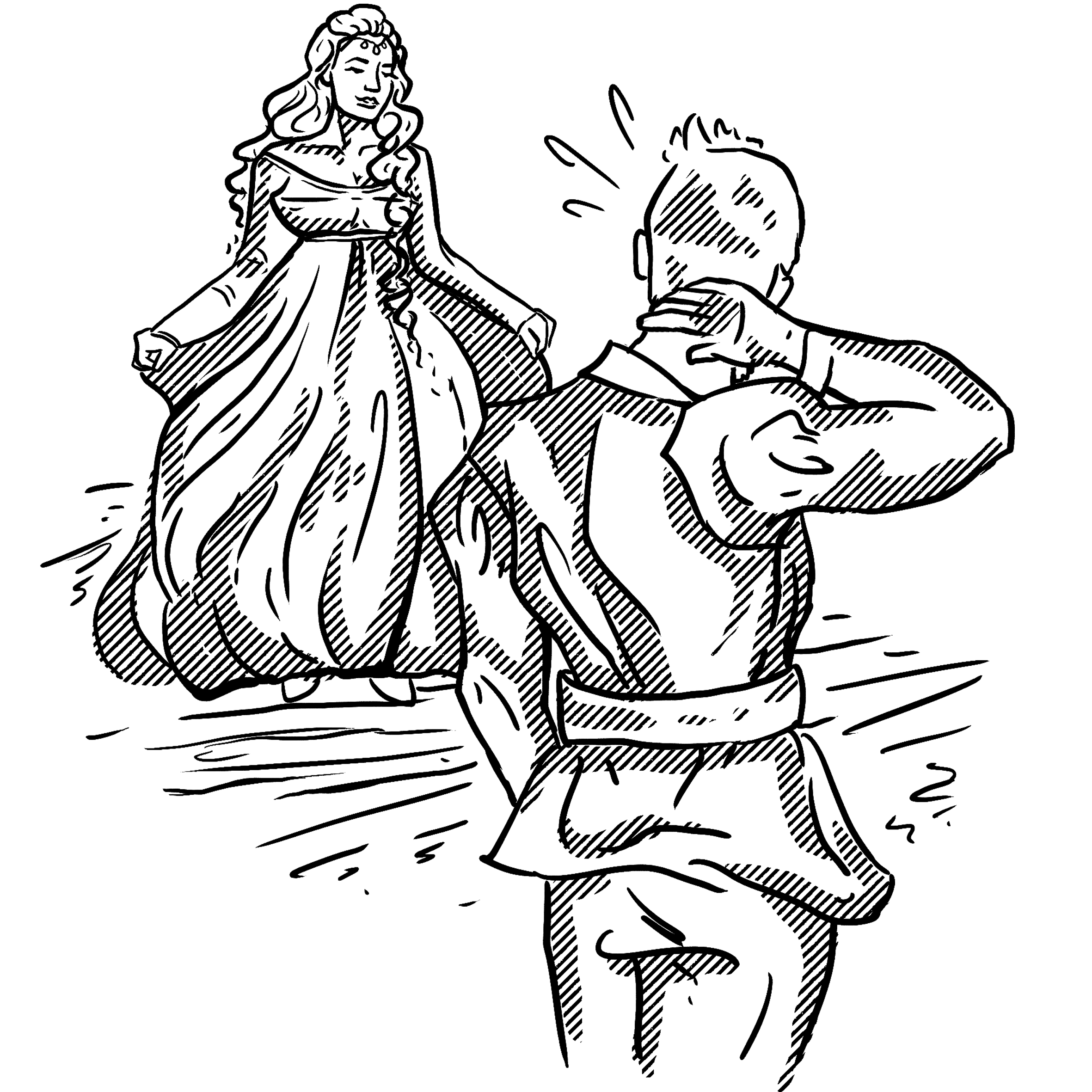 When our Casanova awoke after a few hours of sleep, he couldn’t believe his eyes - his goddess from last night was gone and next to him laid an old woman with grey hair and a huge, wart-covered nose. He rubbed his eyes hoping that what he was seeing was a mirage, but the woman’s face remained unchanged. How could this be? “This was the most beautiful woman to ever cross my path”, he mumbled. In a state of shock, he snuck out of bed, packed his things and disappeared into the night before the clock struck six. 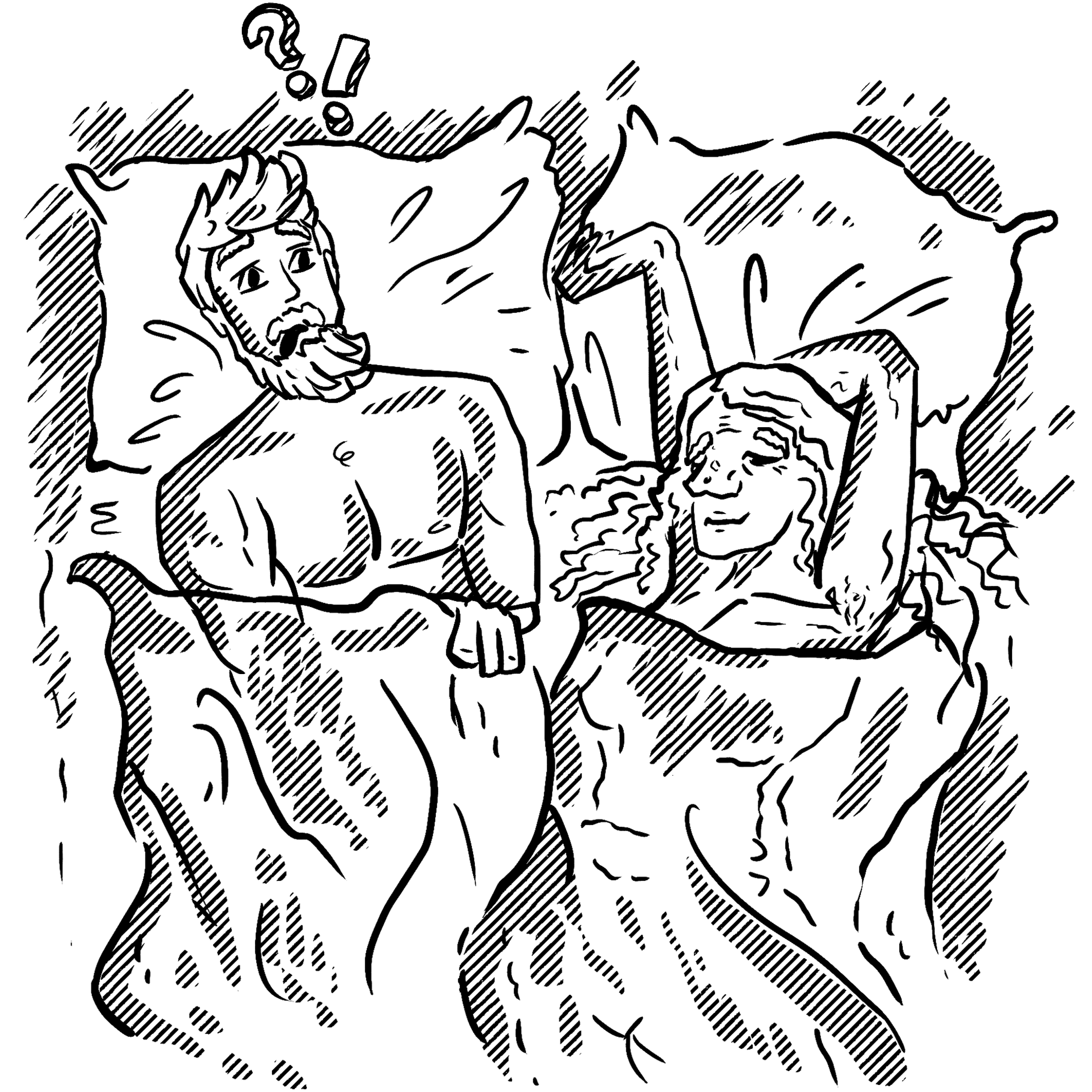 When Rapunzo was on the way home, still recovering from his shock, the earth began to shake and bricks emerged from the ground. Before he could understand what was happening, he found himself standing on a wobbly wooden plank that shot into the sky. A roof appeared above his head and out of nowhere, a tower had formed around him. Our Casanova was now a prisoner, nearly 90 feet above the ground without a way out. 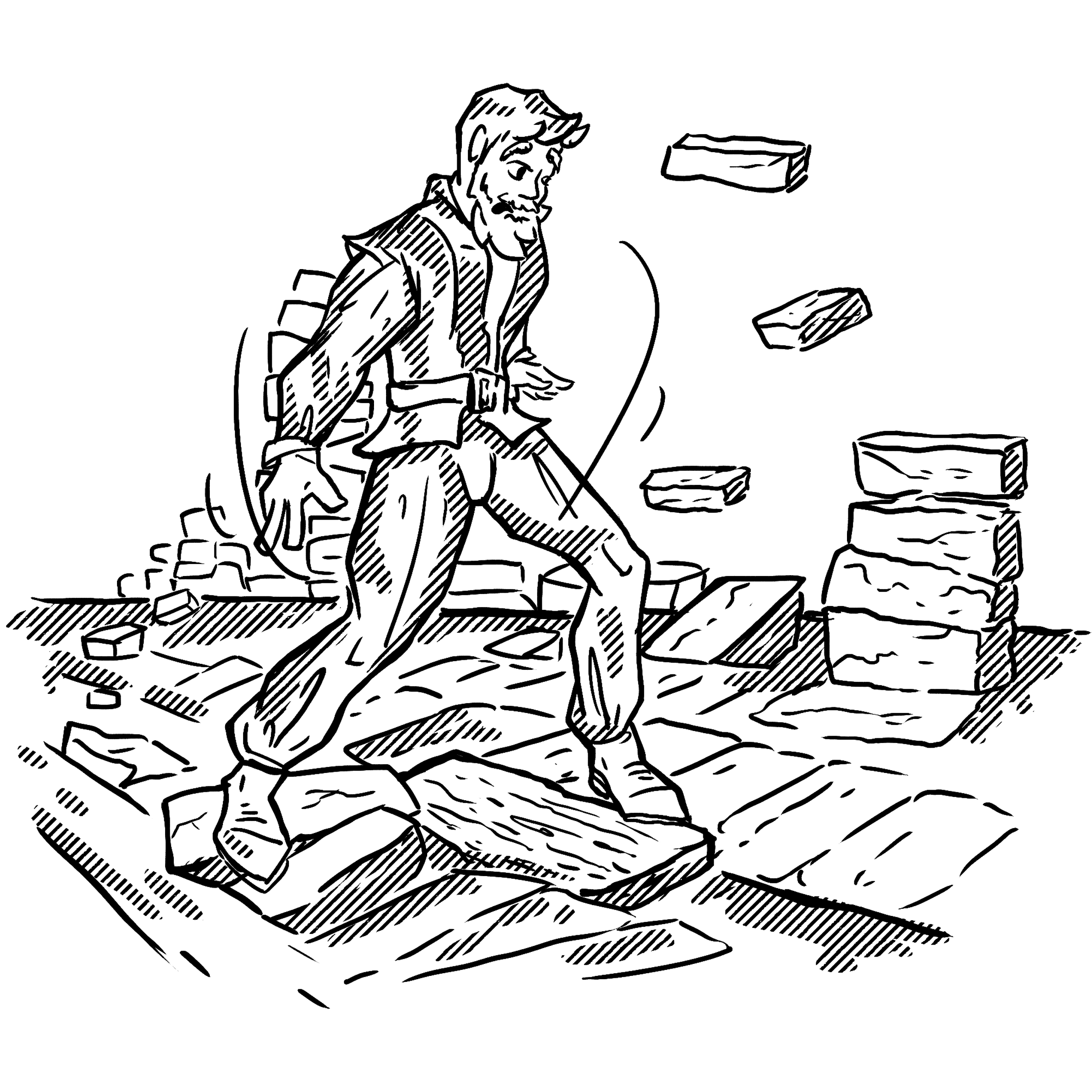 Suddenly, he heard a familiar voice coming from a dark corner of the room. It was the voice of the beautiful woman from the previous night. “Oh Rapunzo. How many hearts have you broken? How many daughters have been banished because of you?” The voice grew louder, and the woman emerged from the dark corner and stepped into the light. Her face was still old, her nose still covered in warts. “How.. how can this be?”, Rapunzo stuttered, visibly horrified. The old woman ignored his question. “This can only end one way!”, she screamed, followed by uncontrolled laughter. “You’ll be imprisoned in this tower until a noble dame comes along to free you.” 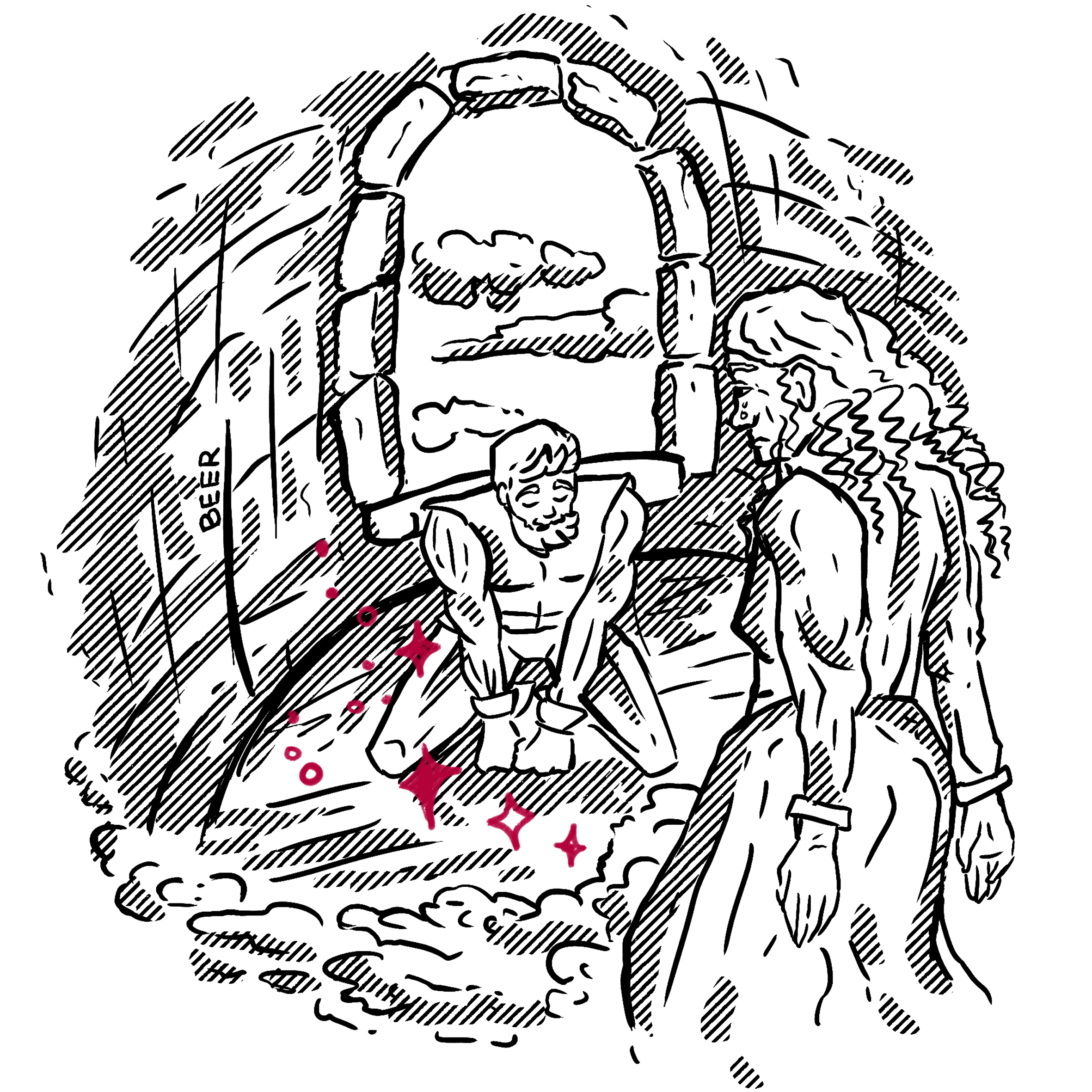 “But listen closely. You must take this woman, who has gone out of her way to save you from your prison, to be your wife and be eternally faithful to her. Should you fail, you’ll find yourself back here again - until the end of your days. This curse will be on you for eternity. The only task left for you is to brew beer - day in, day out. That’s why there are tender hops winding around your tower. Everything else you need to brew your delicious beer, you’ll find in the dungeon. Now, my little heartbreaker do as you have been told until your knight in shining armor arrives to save you.” And with a big POOF, the old woman disappeared and everything left was a cloud of fog. 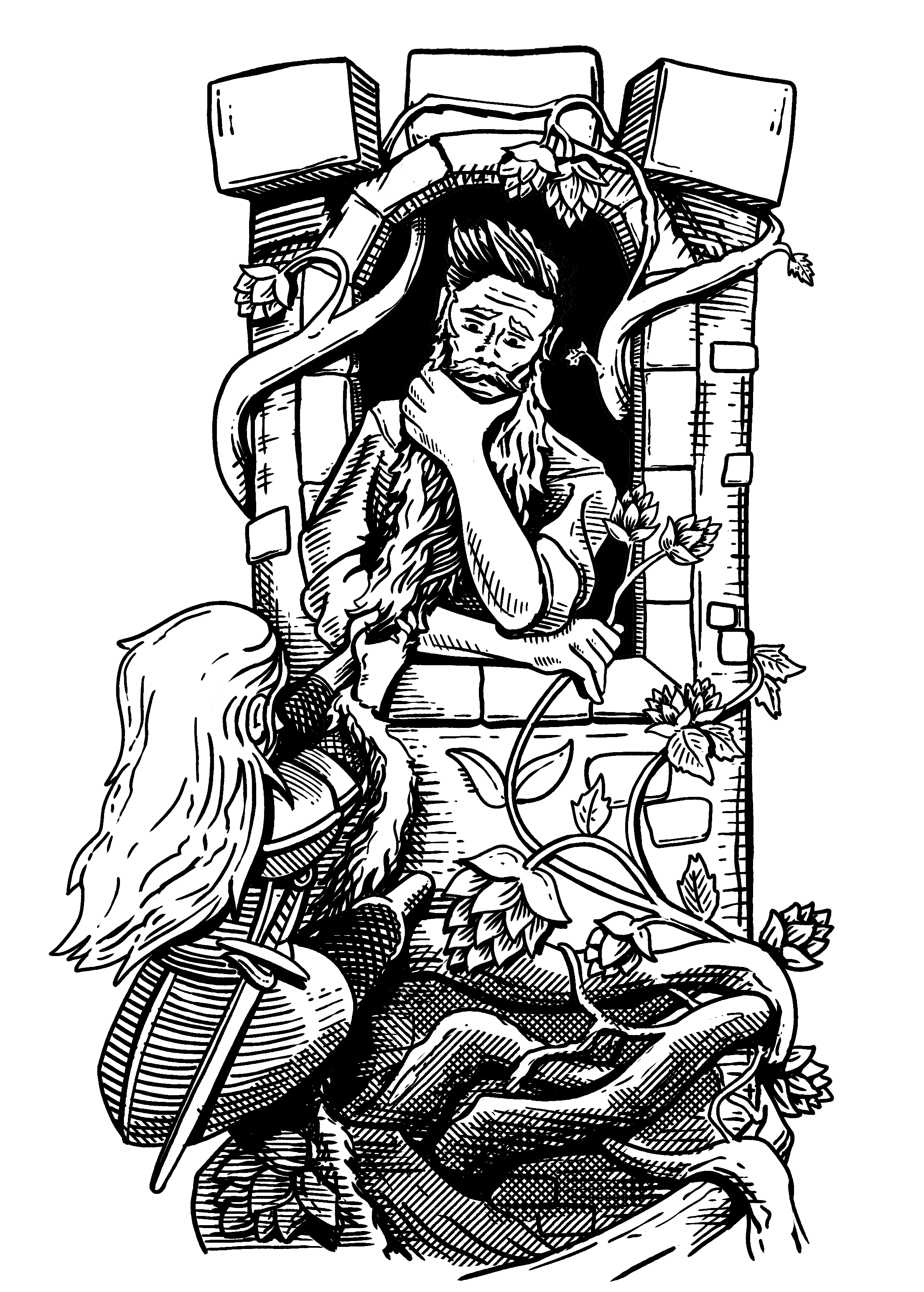 Rapunzo has been waiting for many years for the woman he wants to spend the rest of his life with to free him. Many moons have passed, many wonderful beers have been brewed and six women tried to free our Casanova from his tower. Unsuccessfully. But now, at the seventh attempt, is everything finally going to work out?

about the
IMPERIAL RED

The Powerful Imperial Red Bock Beer Captivates with its pleasant, malt-scented notes, as well as its interesting red colour - thanks to selected and intensively kilned types of malt.

Seven years have passed, but Red Riding Hood and her grandmother have not been able to forget the dreadful night with the evil wolf. The event has left deep scars. Little remains of Red Riding Hood’s cheerful nature; of the little girl with the golden locks. Now an adult, she spends most of her time sitting apathetically on the bench by the tiled stove, talking quietly to herself and drinking her dark red malt concoction. "Simply follow the path and don't let yourself be distracted ... big ears ... BIG EARS!!" 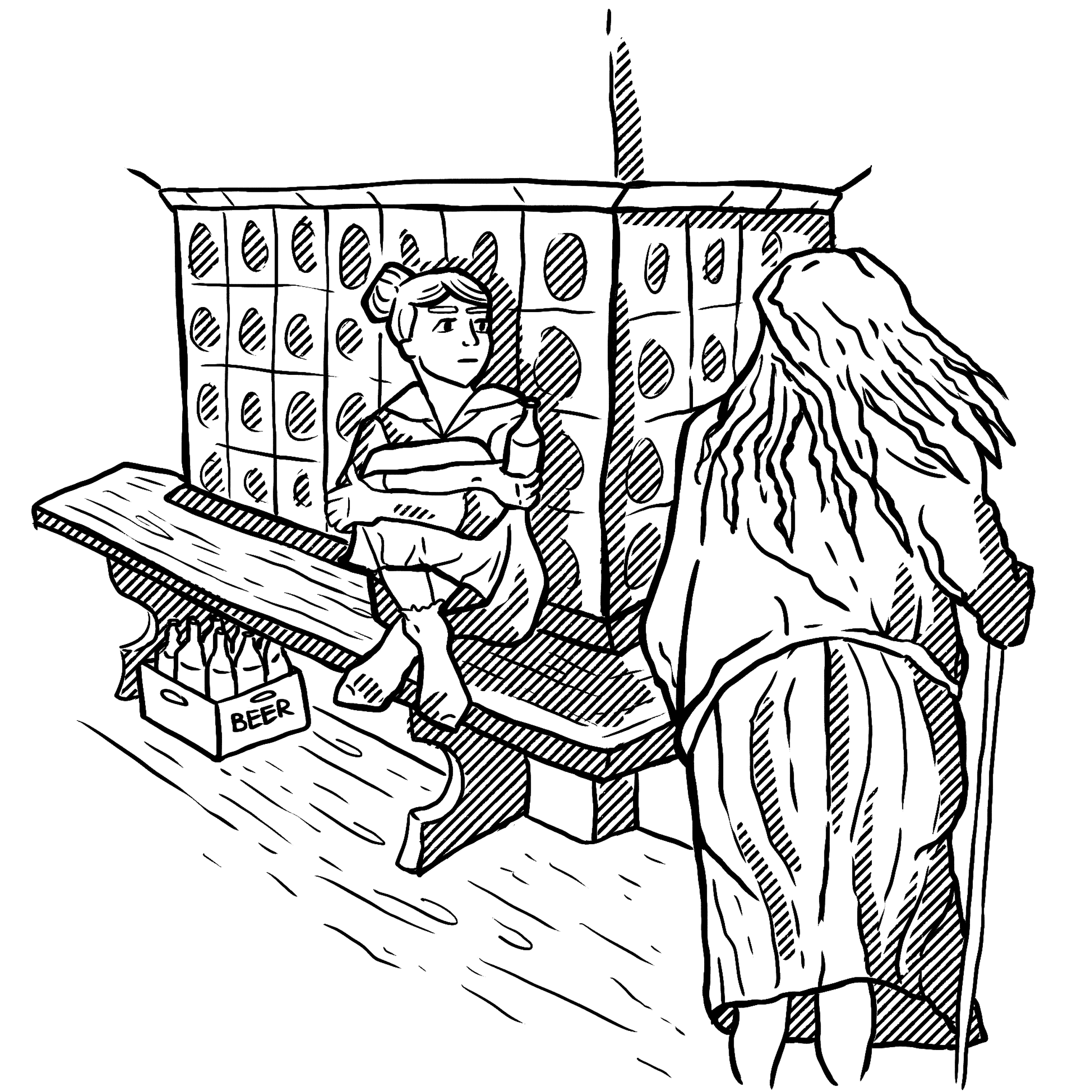 The grandmother too has been disturbed since the events of that fateful day. Rumor has it that she now decorates her house with gingerbread and other sweets… but that’s a story for a different day. 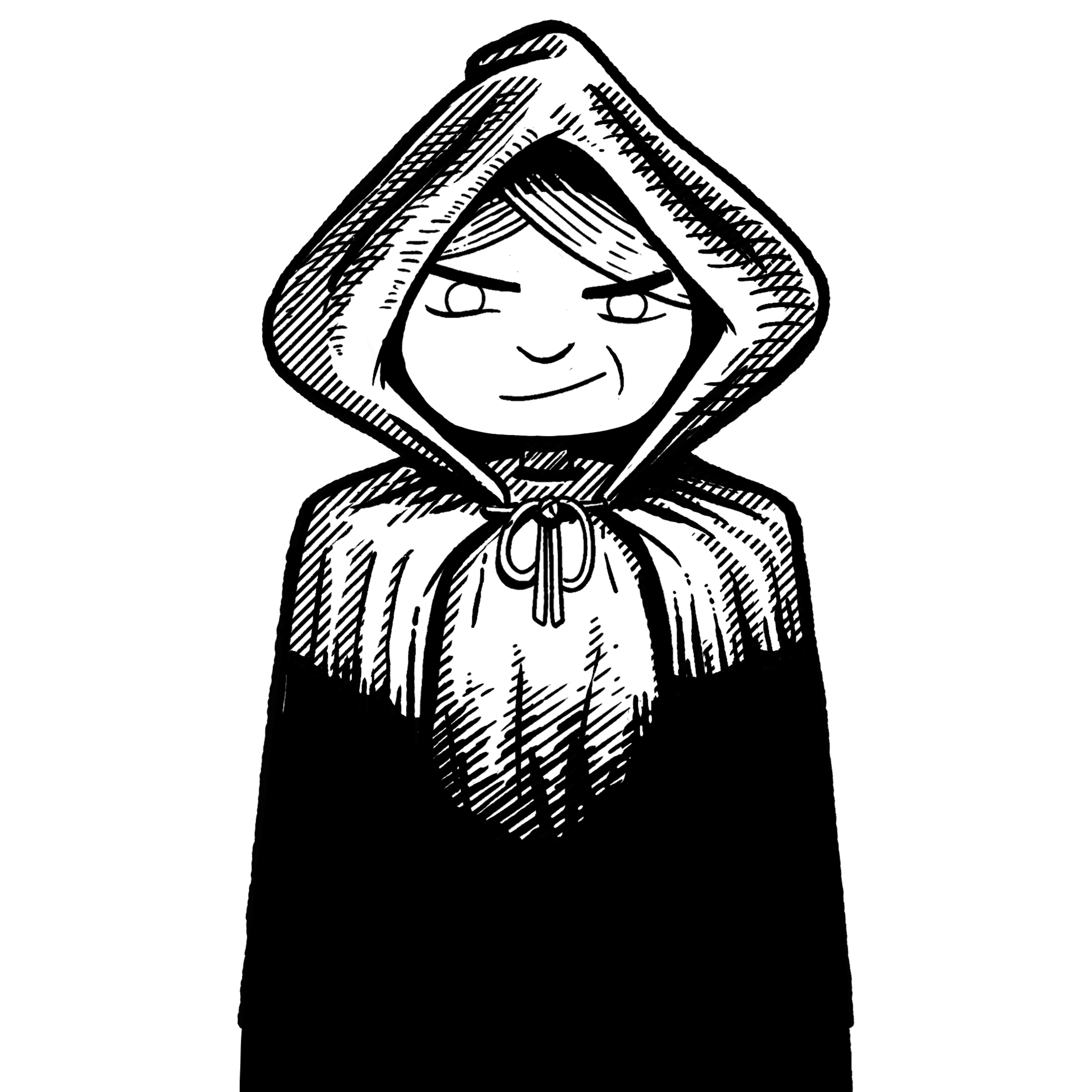 One morning, Red Riding Hood’s usually fearful look changed. It became serious, clear, focussed. The gold-haired woman seemed off. She was quiet, more so than usual, and looked like she was on a mission. All day, she had an odd little smile on her face as if she was looking forward to something special. 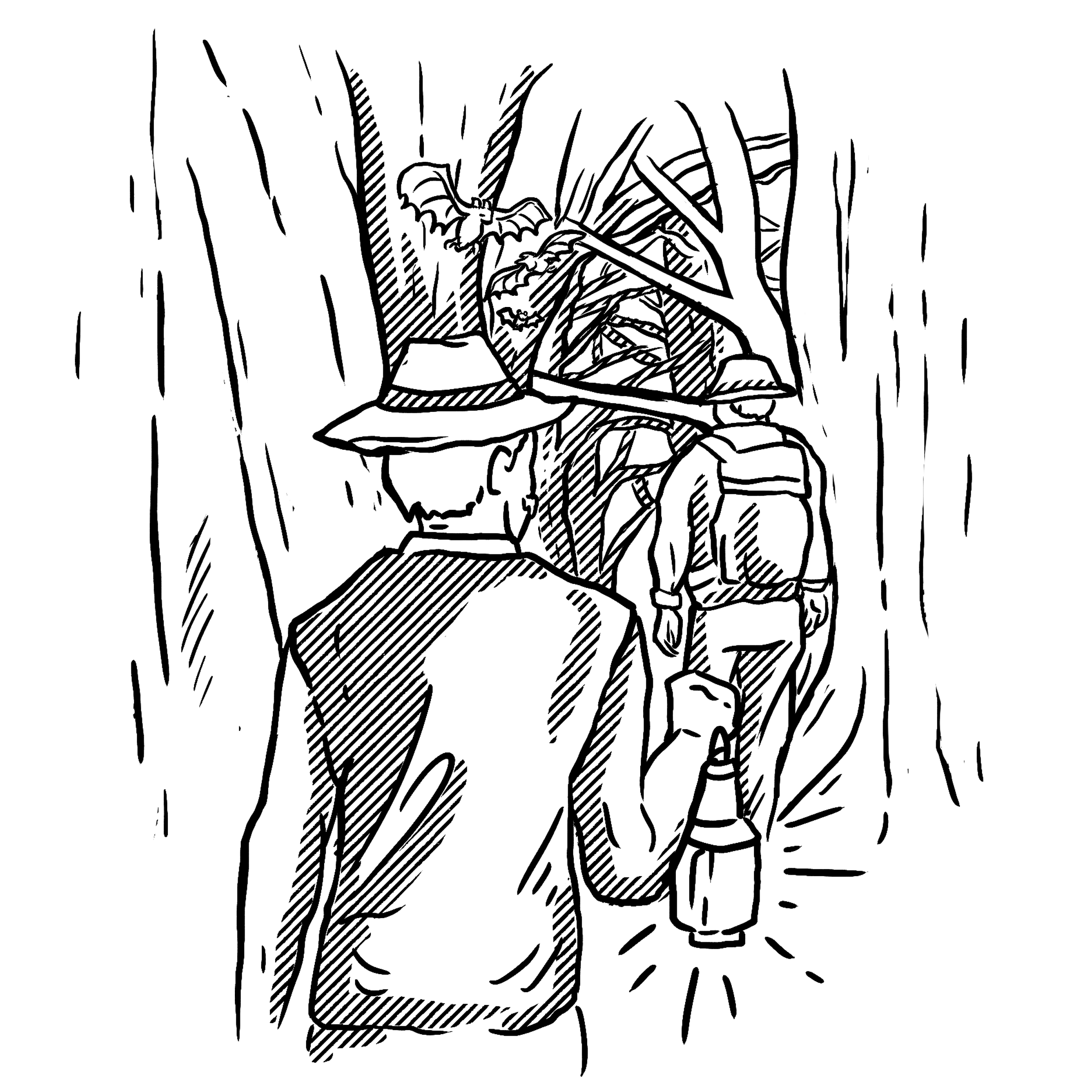 When night fell, the grandmother went to check on Red Riding Hood. But to her surprise, the bench by the tiled stove where the young woman usually sat was empty. The grandmother gasped in shock and dropped her freshly baked cake on the floor. She ran out of the house, rounded up all the people from the village and together they searched every corner of the dark countryside. When they couldn’t find Red Riding Hood anywhere, the grandmother's deepest fears started to become reality. “No, it can’t be.”, she mumbled under her breath. 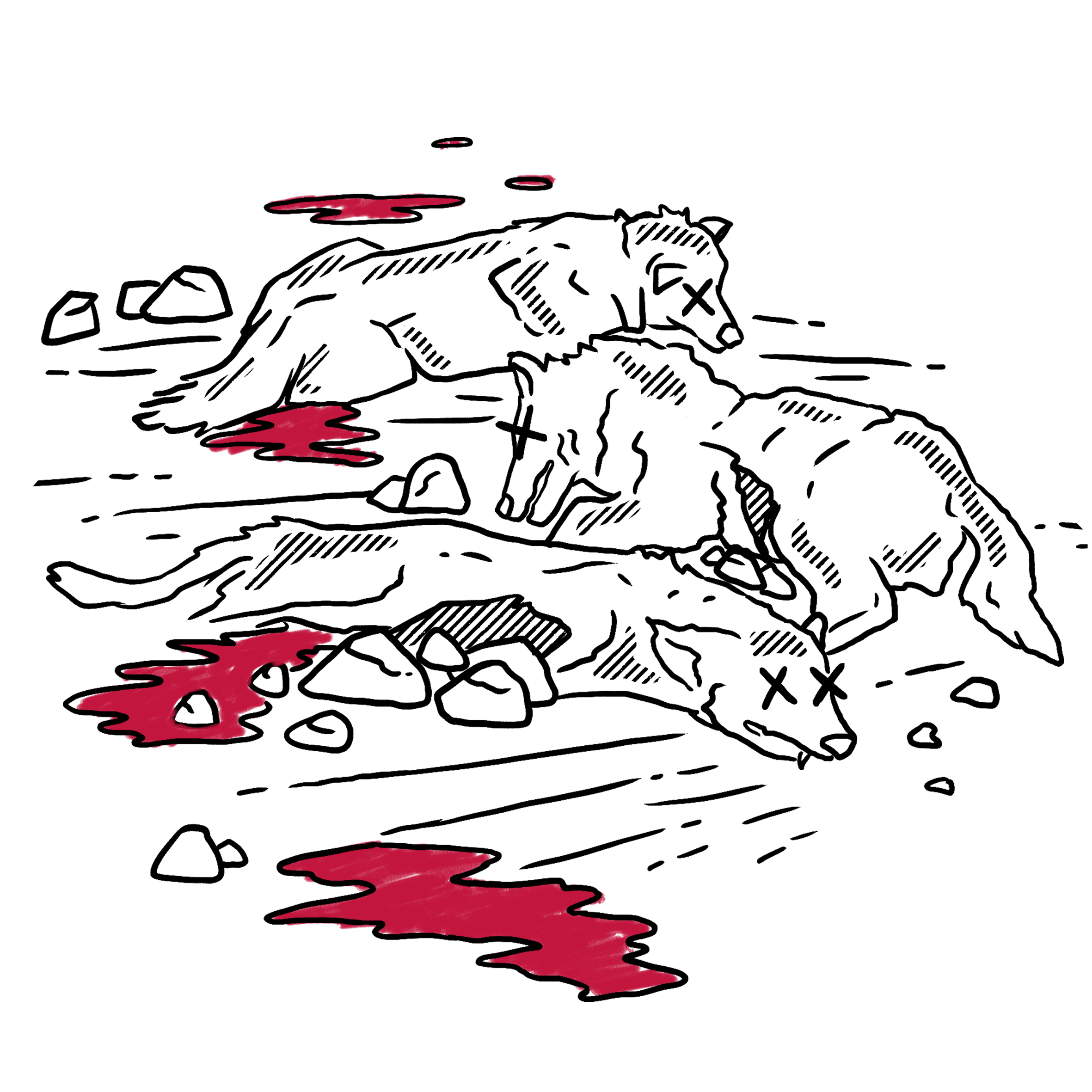 Led by the brave hunter, a troop of fearless villagers combed through the dense forest. With the light of the full moon shimmering through the trees the group ventured deeper and deeper into the woods. “Can you hear the wolves? They’re restless tonight!”, the hunter said to his followers. Just as the search party was losing hope, they came across a pack of dead wolves. “What.. what happened here?”, one villager stuttered. “Whatever it was, we’re talking about a giant monster here.”, the hunter replied quietly. But then his eyes spied stones in the stomach of a wolf that had been slit open. “How is this possible?”, he whispered to himself. He turned around to his companions and said: “Let’s break off the search; we haven’t found anything all night. Maybe Red Riding Hood has found her way home on her own.” 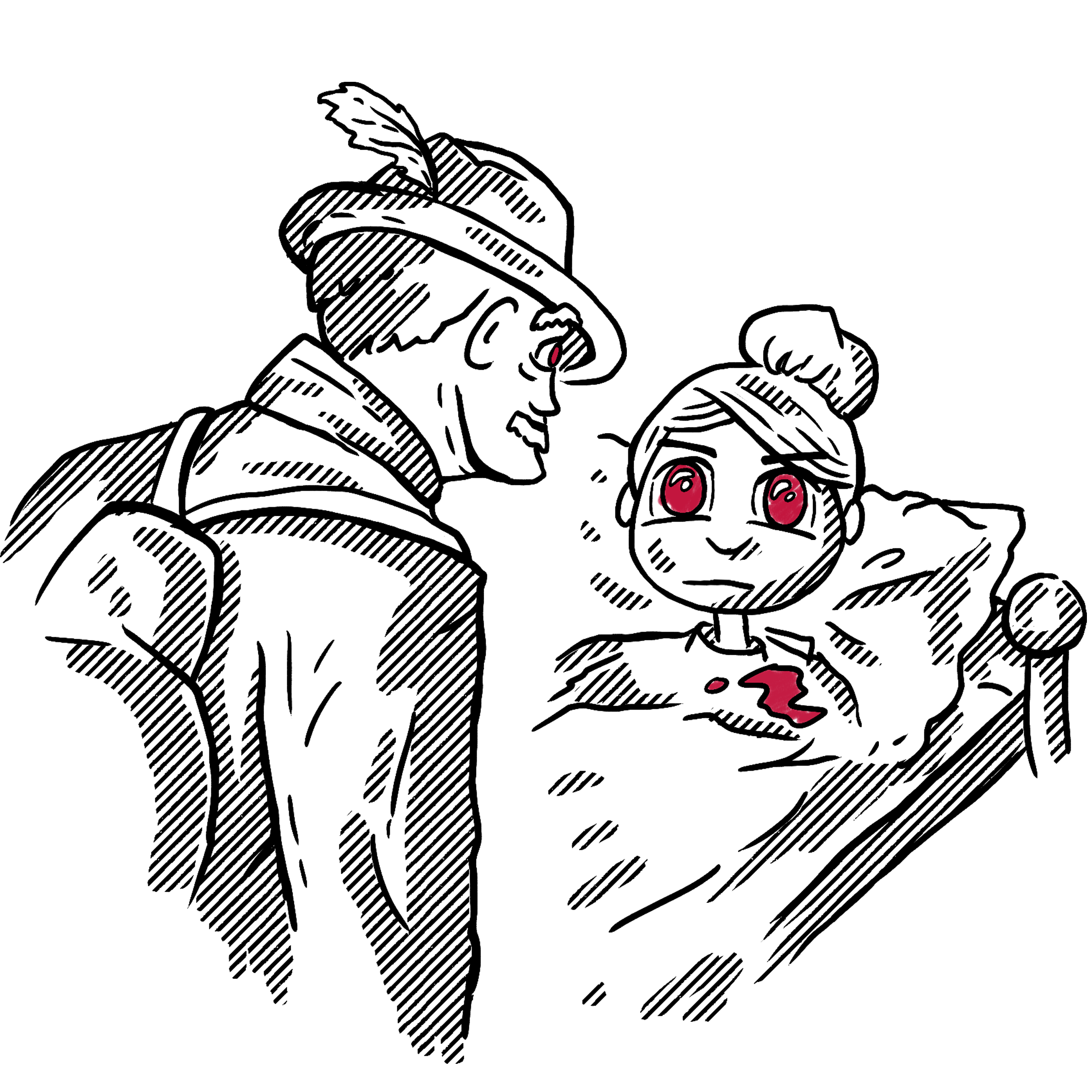 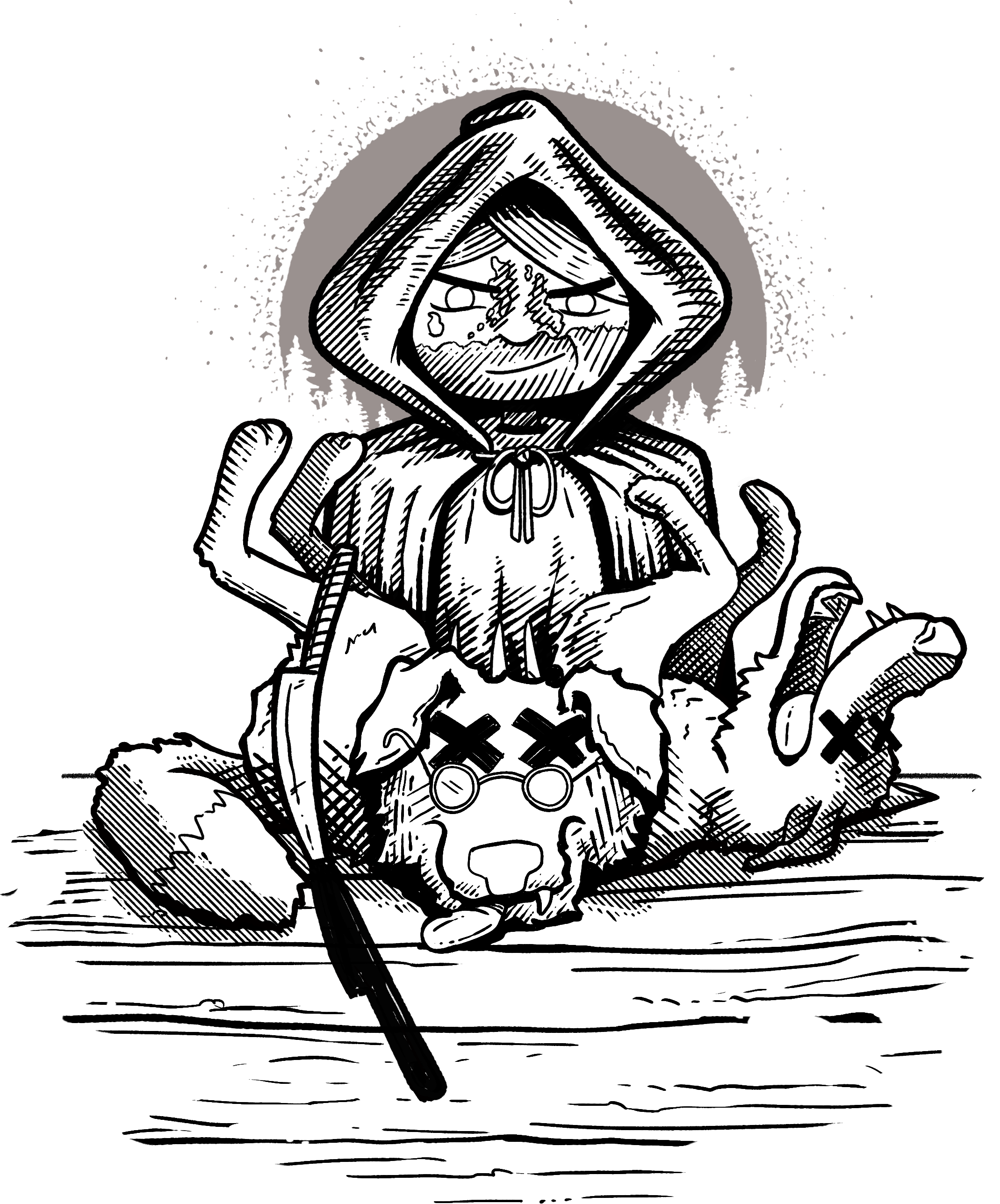 And sure enough, as the hunter predicted, Red Riding Hood lay sleeping on the step of the front door of her house. She smelt strongly of her malt brew, and her clothes were covered in blood. “She must’ve managed to escape the monster!”, the crowd murmured. Everyone was happy and relieved that the monster in the forest hadn’t harmed Red Riding Hood. The brave hunter picked the woman up and carried her to her room where he carefully laid her in her bed. Red Riding Hood opened her deep red eyes. They exchanged a deep look. Without saying a word, she turned on her side and fell asleep. And that night, Red Riding Hood slept more deeply and soundly than the past 7 years.

THE FABULOUS COMBINATION OF TROPICAL AND EARTH FRUIT NOTES OF THE HOP "VIC SECRET" MAKES THE SESSION IPA OF THE SEVEN LADIES A SPECIAL DRINKING EXPERIENCE. ENJOY WELL COOLED.

VIC SECRET: EXOTIC & TROPICAL WITH FRUIT NOTES OF PINEAPPLE AND PASSION FRUIT AND NUTTY-EARTH FLAVORS OF PINE AND PINE

The poor little dwarf
among the seven
Snow Whites

The poor dwarf Alberto came from a beautiful, wealthy family – at least by dwarf standards. Alberto was the youngest and also, unfortunately, the ugliest dwarf. Alongside his optical flaws, the little man was also of an unreliable nature and, to make matters worse, constantly drunk. No one could stand Alberto, and only his birth father stood by him. However, one day, the father failed to come back from the mines, and when his mother married again after a year, his new stepfather wanted nothing to do with the poor little dwarf and came up with a plan to get rid of him. 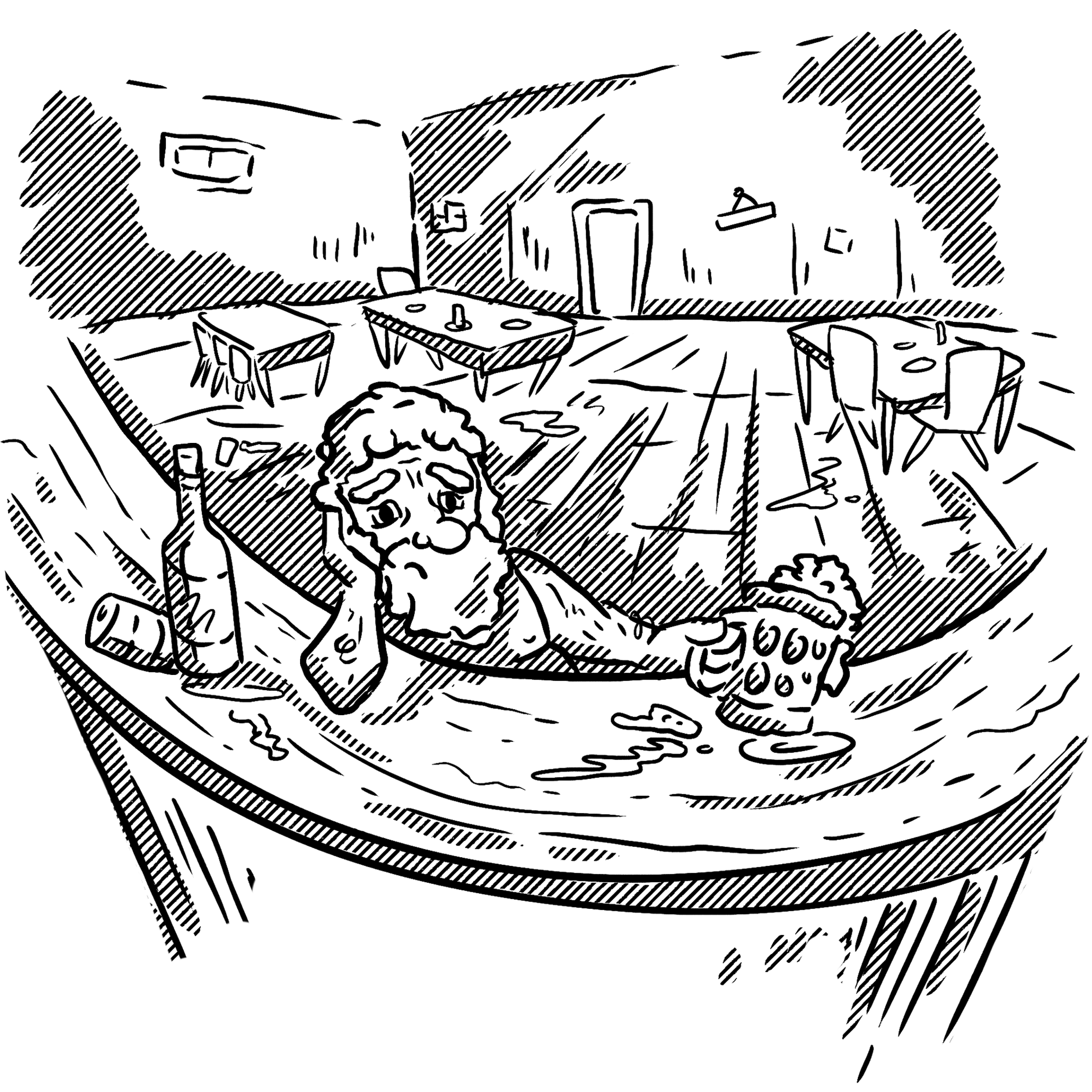 One night, when the two of them met in an inn, the stepfather realized the time had come. He pretended to be extremely friendly and bought Alberto one round after another – but he only filled his own tankard halfway each time. When Alberto was so drunk that he fell asleep at the bar, the stepfather hoisted him over his shoulder, took him through the foggy night into the dark forest and abandoned the inebriated dwarf. 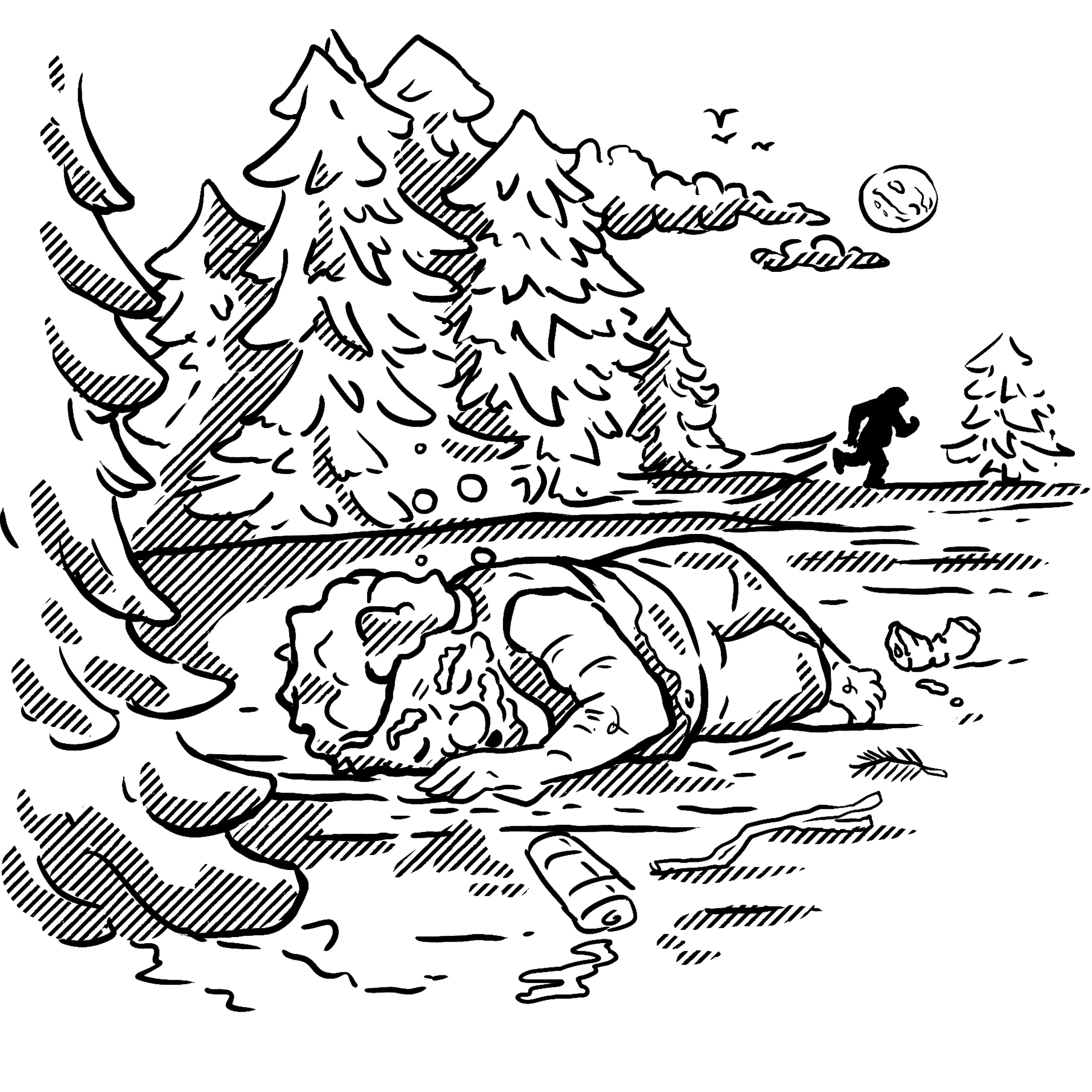 When Alberto came to again, he had the hangover of his life - he couldn't remember anything from the night before. "How did I get here?" the dwarf wondered and winced as the pain shot through his head again. The little chap wandered aimlessly around until he finally came to a small hut. Very carefully he opened the door and was absolutely amazed: had he actually found a little brewery in the middle of the forest? Inside, he saw a table with seven chairs and seven mugs. Alberto immediately smelt the fragrance of pineapple and passion fruit, all rounded off by pine and spruce. The wonderful odour was coming from the mugs on the table. To start with, he didn't dare move, but then it occurred to him: "Hair of the dog! That's what I need just now. A person just can't think straight with this headache." 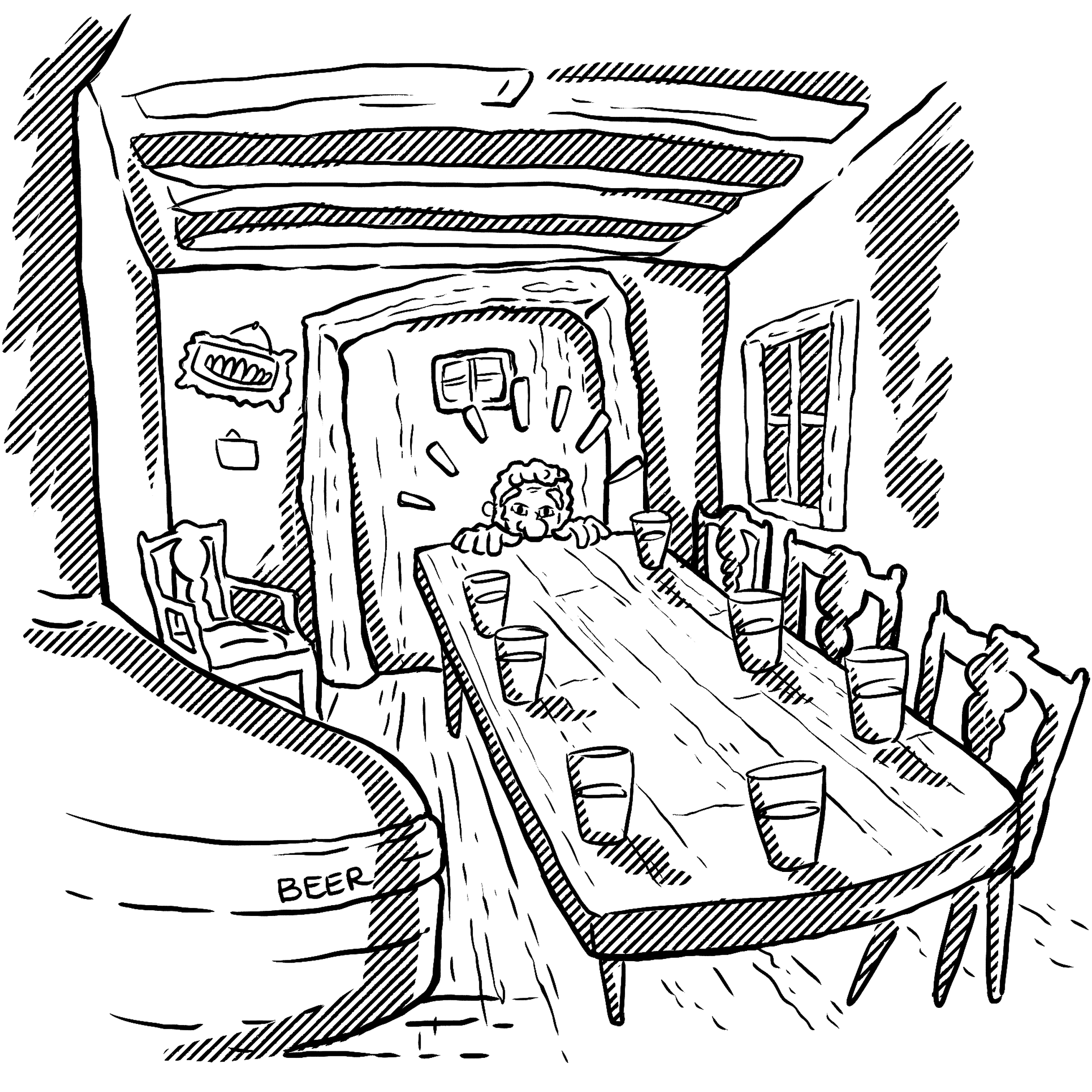 And so, he simply took a drink from each mug, so that no one would notice. When he had taken his first seven sips, he was starting to feel a little better. The delicious brew tasted so amazingly good that he treated himself to another round from all the mugs. Now he had drunk himself into a proper state, as it were, and before you could blink, all seven mugs were empty. Little Alberto was so legless again that he fell asleep straight away. 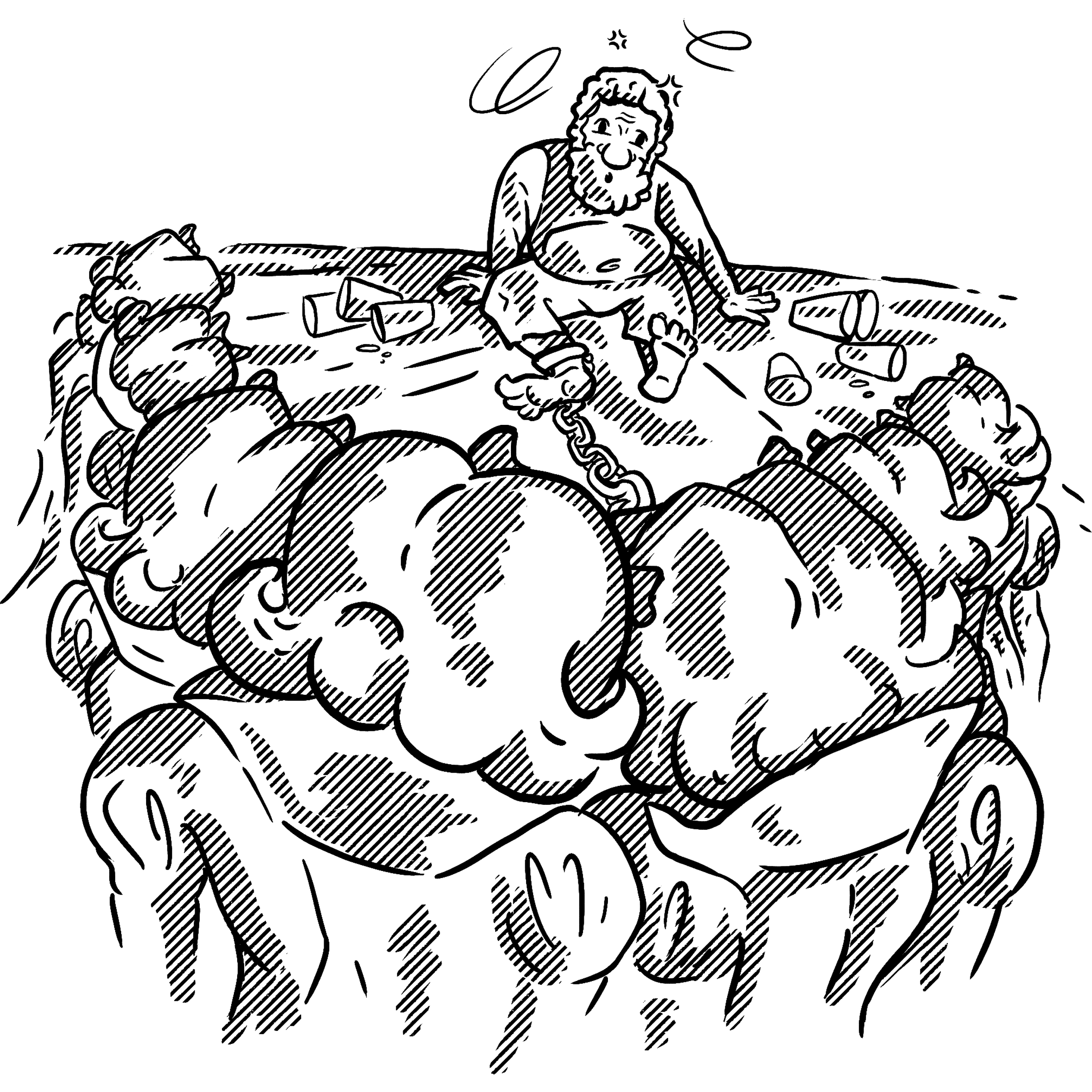 Then the door opened and seven young women with snow-white skin, ebony-black hair, red
lips and tight leather bodices came in. "Who`s been drinking out of my mug?", asked one of the women. Angry at the thought that she had been done out of her well-earned after-work Session IPA, she and the others searched the brewery. Suddenly, they saw the little dwarf asleep on the floor. "No, you don't, you scoundrel!" the seven ladies thought, and chained up the little drunkard.

When he woke up again, Alberto couldn't move. One of the women bent down to him, cracked her whip and said: "You drank our beer, you ill-mannered, nasty little worm! As a penalty, you're now going to be our house dwarf and do all the work around the brewing kettles! You'll keep everything clean here, otherwise there'll be trouble! If you're a good boy, we'll give you an apple now again, and maybe one of our IPAs. And now – get to work!"


And if nobody's saved him, then little Alberto is still slaving away in the hut of the seven
beautiful – but very domineering – Snow Whites. 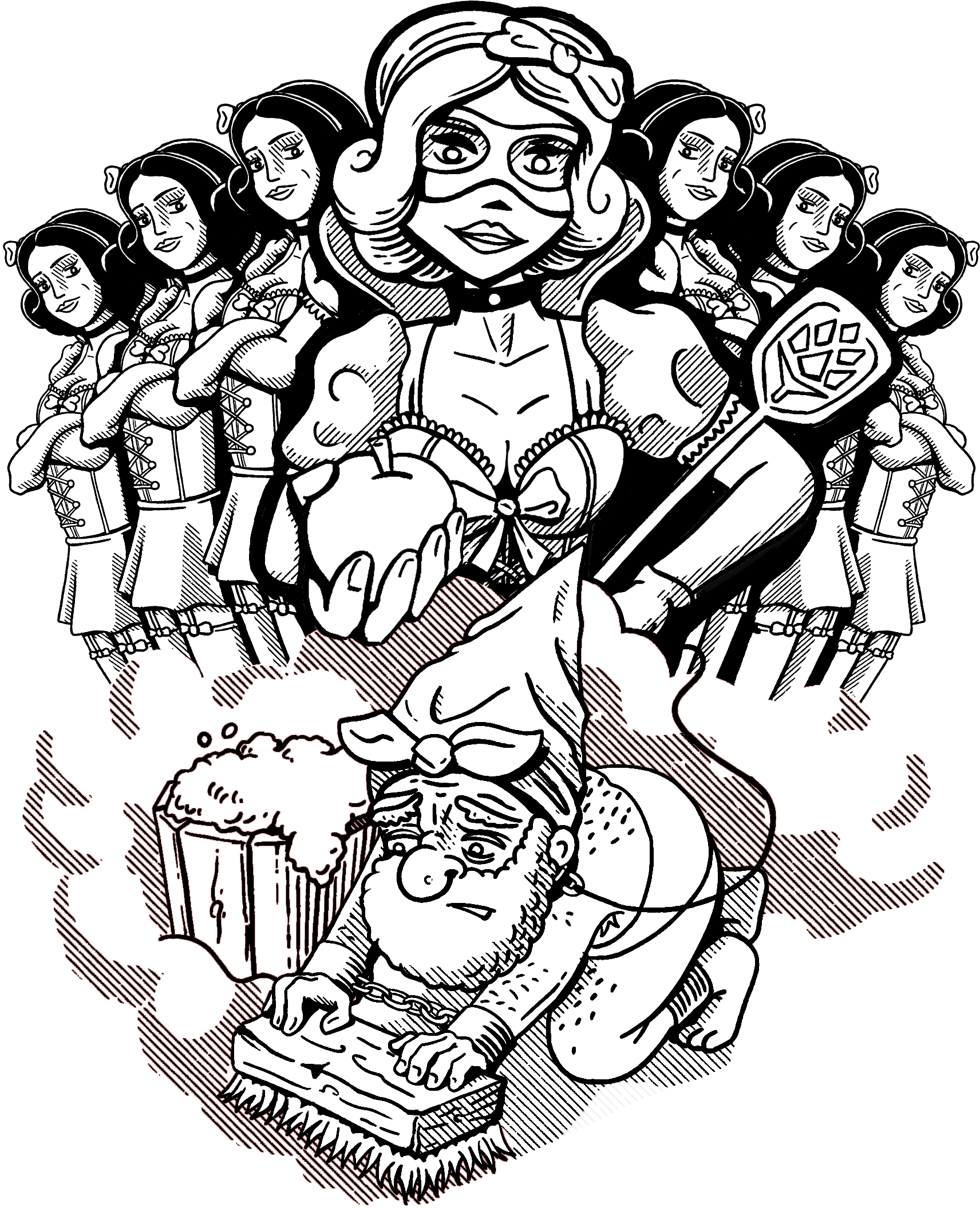